I’ve just been back to my home town for a few days to visit family and especially my mother, who just turned 95. I was born in Wentworth and lived on a property in Curlwaa, New South Wales, for my first few years and then moved interstate to Mildura, the other side of the  Murray River. Most of my

memories are of life in Mildura but I do have some memories of Curlwaa. The old school has gone and so has our old house but my sister and I drove around the area where they used to be. We also went to the Wentworth Hospital, where I was born and hadn’t seen since, so that was interesting. It’s popped up in my book Stony Creek so I wanted to have a look. I was delighted to find an old Ferguson tractor there, also in my book. The Fergies were used extensively in the severe floods that hit the area in 1956.

I didn’t particularly appreciate it when I lived there but I’m always blown away by the Murray River when I go home–it’s quite spectacular and is of course the whole reason Mildura and Wentworth, as well as surrounding areas, grew into what they are today. Both the Murray and the Darling were used as highways in the early days and there 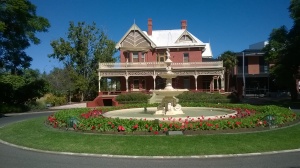 are still paddle-steamers operating, now for tourists. The area also relies on the river to irrigate the many different kinds of fruit and vegetables grown there. Known as Sunraysia the area is well known for its citrus and grapes–especially dried grapes but it also produces wine–as well as other fruit and vegetables. It was the first place in Australia to be irrigated, thanks to Canada’s Chaffey Brothers. http://en.wikipedia.org/wiki/William_Chaffey

Rain tends to be scarce and it’s usually the warmest place in the state, so it’s a popular tourist destination. Only problem is it’s a long trip from anywhere, including where I live now, with nothing much to look at along the way! I’ve put a few other photos on my Pictures of Oz page.

My novelette ‘Dark Innocence’ is free on April 29 and is set in Mildura, so have a look at  the pictures and a free read as well. Happy Reading!